The first workshop for Croatian teachers 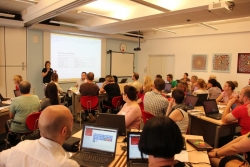 The first workshop for Croatian teachers in the project „Assessment of Transversal Skills 2020“ was held in Zagreb, Croatia on June 16, 2016. The workshop was intended for the teachers from 30 Croatian primary schools that expressed their interest in participating in the project during the school year 2016/17. The workshop was planned as the first meeting of the experimental teachers and the national project team and also as another part of teachers' professional development scheduled in the project, following the three previously held webinars.

Of 60 teachers who intend to support the development of transversal skills of their students and are prepared to implement the ATS2020 learning model in order to do so, 56 participated in the workshop. In the workshop the teachers were informed about the details of the project, about the ATS2020 learning model and about each skill selected to be developed during the project, namely: autonomous learning, information literacy, communication and collaboration, creativity and innovation and digital literacy.

Special attention was given to the evaluation procedures in the project as it is important that the teachers are properly informed about the international research that will be conducted in 11 European countries as part of the project, in which they will participate together with their students.

In the practical part of the workshop teachers were introduced to the learning design concept as planned in the project and they also had the opportunity to develop one macro-level and one micro-level learning design. This activity was completed in group-work, thus allowing teachers of the same subjects to meet their colleagues and start exchanging ideas, which will in future mostly take place in an online environment.

Part of the workshop was organised in the computer classroom where participants were introduced to Office365 platform and some of the tools that will be used during the project (yammer, share-point). In this way participants acquired the basic information about the online environment in which most of the project activities will take place, also the basic rules of online communication were discussed and any technical issues or registration and access difficulties were dealt with during this first contact in physical world.

Co-funded by the Erasmus+ Programme of the European Union

The ATS2020 project is funded with support from the European Commission. This publication reflects the views only of the author, and the Commission cannot be held responsible for any use which may be made of the information contained therein.